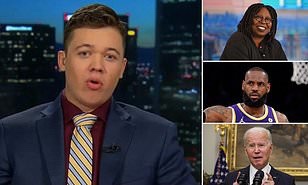 Kyle Rittenhouse, 18, is planning on suing celebrities including Whoopi Goldberg, 66.

The teenager, who gained notoriety after he shot three protestors during June 2020 Black Lives Matter protests in Kenosha, Wisconsin, announced plans to take legal action against a variety of people. He included The View moderator, because he said that she called him a “murderer” after he was acquitted from homicide charges during his trial in December 2021.

Rittenhouse made the announcement on Fox News’ “Tucker Carlson Tonight.”

“I don’t want to see anybody else have to deal with what I went through,” Rittenhouse, 18, said, adding that he was looking at suing “politicians, celebrities, athletes” who called him a “murderer,” despite his acquittal for killing two men and injuring a third during a protest riot in Kenosha, Wisconsin in 2020.

Rittenhouse said shortly after the verdict, he was contacted by Nicholas Sandmann, a student who was featured in a 2019 viral video that showed him staring down a Native American activist in Washington D.C. Sandmann sued several media organizations and reached settlements with CNN, The Washington Post and NBC News for coverage that made him appear racist.

Rittenhouse said Whoopi Goldberg of “The View” and Cenk Uygur of “The Young Turks” are among a list of people he is considering suing.

“We’re going to handle them in a courtroom,” he said.

TUCKER: "Will you be suing any news organizations?"

KYLE RITTENHOUSE: "We're looking at quite a few, politicians, athletes, celebrities, Whoppi Goldberg is on the list, she called me a murderer after I was acquitted… So is Cenk [Uyhur] from the Young Turks." pic.twitter.com/MULZf38Vkf

One thought on “Kyle Rittenhouse to Sue Celebrities and Athletes Who Called Him a Murderer?”