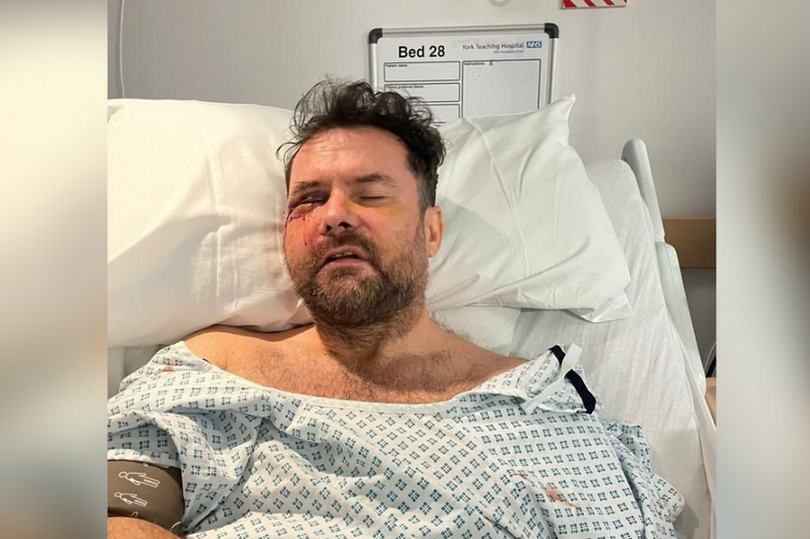 A man who was beaten within an inch of his life for simply asking directions has been left “absolutely broken”, according to his family. Shaun Mollon was repeatedly hit while on the ground in a horrifying unprovoked attack on High Street, Cheadle, Staffordshire, at around 2.30am on Friday, September 23.

Staffordshire Live reports how the 49-year-old was in the town for work and had gone out for dinner and drinks with colleagues when he decided to call it a night and head back to his hotel as he had work the next day. However, after taking a wrong turn he found himself lost. He spotted a group of people in a car park just off High Street he decided to ask for directions.

His heartbroken wife Julianne explained he was asking for directions to the Premier Inn when he was “completely blindsided” as he was approached from behind and punched to the side of his face. He was beaten unconscious.

The group, made up of youths believed to be in their 20s and young girls, left him and drove off in a car. Mr Mollon did not have anything stolen in the incident, she said.

Badly injured Mr Mollon came round after the attack and managed to get back to his colleagues, who quickly got him to hospital. He has been left with horrendous and painful injuries including a fractured jaw, and shattered eye socket and cheek bone.

He had surgery yesterday morning, Thursday, September 29, to reconstruct his face with metal plates and pins back in his home city of York. The father-of-two was initially taken to Queen’s Hospital in Burton before being moved to Derby.

He was allowed home to York as the surgery could not be done until the swelling had gone done. He is unable to eat or drink due to the pain. However, aside from the physical injuries, the ordeal has taken a huge toll on his mental health, his wife said.

Julianne said: “He is absolutely broken and has not come out of his room for a week. It’s destroyed our lives. He is frightened of any little noise and doesn’t want anyone touching him.

“He is not the person he was. He’s scared all the time and he keeps having flashbacks as stuff keeps coming back to him and he keeps reliving that initial impact. It’s horrific.

“It’s been really difficult for all of us. My daughter has been so upset as he doesn’t look like daddy or behave like him. He’s a broken man.”

Julianne was told what had happened after getting a call from her husband at 3am, but she could hardly understand him because of his broken jaw. She said: “I just got up and I was sick and as soon as I was able to I got a friend to take me to Derby as I wasn’t fit to drive.

“He is lucky to be alive. It’s such a cruel and callous thing to do and just run away. He could have been dead. He was on his own and had a few pints, he was vulnerable. I just hope that someone who witnessed it has a conscience and thinks this isn’t right.”