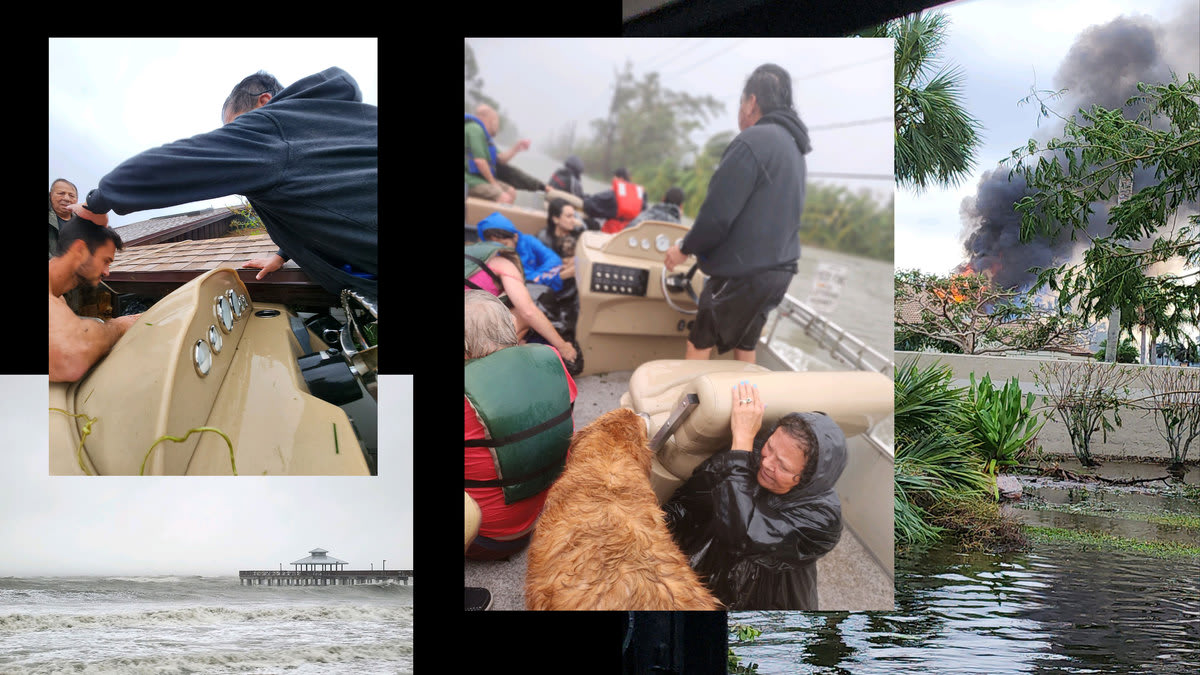 Kevin Ott had planned to ride out Hurricane Ian in his Fort Myers home, but ended up on a dangerous rescue mission to save his family—and 13 others—from the strongest storm to slam the coast in decades.

Between roughly 2:30 p.m. and 7 p.m. Wednesday, the 53-year-old captained a friend’s pontoon boat up and down Island Park Road in Fort Myers, rescuing not only his own children’s grandmother, Mary Ann Dineen, but over a dozen more.

“The water, that was unbelievable,” Ott told The Daily Beast. “That water came on so quick. We were scrambling, trying [as] fast [as] we can to get back to [Dineen] and it was just—within an hour, half an hour, or less, it was there. And these people were freaking out on top of the roofs, the people who were in the second stories, they were sitting there waving us down.”

Just hours earlier, Ott and his family were sure things wouldn’t be so bad.

Ott has called Fort Myers home for over 50 years. And he’s survived many hurricanes, even back when storms weren’t given proper names and there was only a two-lane road out of town.

He’s even built a business off boat-owners with “insurance problems,” and his daughter married into a family with a restaurant that provides food to shelters during storms.

At first, everything seemed OK on Wednesday. Ott battened down the hatches at home and began to wait out the storm after hearing assurances from Dineen that they would be alright.

But the situation switched from manageable to dire in the blink of an eye.

“[Dineen] called me, she started crying. She goes, ‘The water’s coming up quick, we’ve already got water in the house. You’ve gotta get here!’”

Roughly 10 minutes later, another call came in: “Kevin, you’ve got to get here now because we’re now knee deep.”

Ott raced in his truck with his two teenage kids and 23-year-old son to Island Park Road, where Dineen, her daughter, and her daughter’s boyfriend were trapped. But he was stopped by the rising floodwaters when his own truck began to float.

The family feared they’d get electrocuted from downed power lines.

“The truck floated the one time and I turned around. I’m like, ‘No, we gotta go back, kids. We can’t get grandmother this way. We’ve gotta go back to the shop.’”

Ott grabbed his friend’s pontoon boat and “dumped it in” on Island Park Road, just in front of a high school. As they drove, his son looked out for dangers from the front of the boat—including the source of a couple of bumps the pontoon sustained: cars floating underwater.

It was nearly 3 p.m. when they set out into a full-force hurricane.

“We actually went right through the center of the houses,” said Ott. “We were going through them and going right over top the white fences.”

“We’ve seen a little kid and a mother and a father. They were at the doorway, all the way up to the very top with life jackets on with the little kid holding them,” he said. “I’m like ‘No!’ I said, ‘We got to stop and get these guys. We can’t just pass them.’ And then we’ve seen another old guy… and he was freaking out so we swung in there and grabbed him.”

Wind and rain whipped around the family. Then, Ott received another text message from Dineen, who said they were “probably going to die there,” he recalled. “And that’s when we pulled up.”

The three family members were floating in a canoe in the middle of their kitchen after escaping their loft, which had begun to smell of a gas leak.

Once the family was aboard, the rescue mission didn’t stop there.

“We stayed up there ’til almost 7 o’clock probably because when we started going out to the grandma’s house on Island Park, there’s people waving us down,” he said, later adding: “We can’t just pass them.”

The group chugged through wind, rain, and buzzing power lines to save an elderly couple on oxygen, and more. They worked together to even rescue two cats and two dogs—including Dineen’s golden retriever, Bentley.

“I had 15, 16 people, I couldn’t stop anymore. I felt bad but then when it got dark, then I really couldn’t see,” said Ott, who lamented he couldn’t help more people who had been waving him down even after he had a full boat.

“I would have died without you,” one of the rescued men later told Ott.

Now, he says, homes are burning and people remain trapped without electricity, food, or fuel. Even Ott’s parents are still in need of aid.

“Back when Irma hit, they had the same problem with the flooding. The county thought they fixed it but they weren’t planning on this one hitting us like this,” said Ott. “The sad thing is nobody can find fuel, nobody can find anything.”

Ott said folks in his neighborhood were caught unawares.