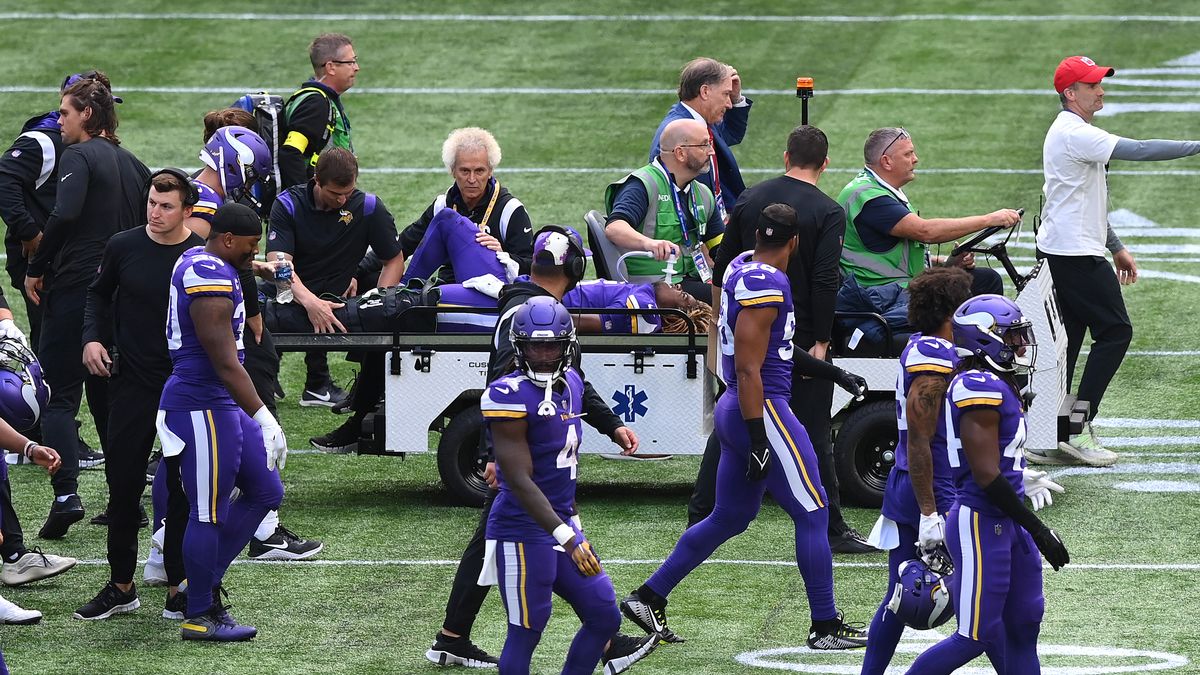 Minnesota Vikings star Lewis Cine suffered a horrific injury in the first quarter of their NFL clash with the New Orleans Saints in London.

The Vikings got off to a bright start at the Tottenham Hotspur Stadium in the first 2022 International Series game to be held in the UK. But their momentum was stalled by a gruesome injury to safety Cine whilst the Vikings returned a punt just before the end of the first quarter.

Cine was blocking a Saints player on the punt return when he landed awkwardly and his left leg buckled horrendously under the turf. Replays showed what appeared to be a serious injury to his lower left leg/ankle and the footage was not shown on the big screens around the stadium.

Cine was carted off the field using gas and air for pain relief as his teammates gathered around to wish him well after the injury. An air cast was fitted around his lower left leg and he was taken straight to hospital.

Vikings head coach Kevin O’Connell revealed after the game that Cine would remain in London to undergo surgery on a fractured leg with members of the organisation set to stay behind to remain with him.

“With that I do want to hit quickly open with Lewis Cine,” O’Connell said; “Very tough moment for our team. Obviously a guy that from day one has been a personal favourite of mine, done everything we asked, was continuing to progress in his rookie year, really having a dynamic role for us on teams.

“He did have a lower leg fracture. We got him the immediate medical care at a local hospital. Everything I’ve been told, the care, obviously the local folks here have been phenomenal with Lou.

“He will be having surgery to fix that here. We feel very strongly about not only the local doctors, but our medical team that will stay back with Lou and get that fixed up for him. As soon as he’s able to make the transition back to the Twin Cities, we’ll do that.

“Until then, all we care about is wrapping our arms around him, having support stay here with him, then ultimately when it’s right for the player, what’s most important is everything happens for the betterment of Lou’s health.”

Haitian-born defensive back Cine, 22, was the Vikings’ first round draft pick this off-season, being taken 32nd overall after an impressive college career with the Georgia Bulldogs. His injury appears almost certain to prematurely end his rookie season.

Just moments later, quarterback Kirk Cousins threw an interception to Tyrann Mathieu to give the Saints a chance to get back into the game. The injury-hit Saints went 7-0 down as the Vikings capped off an impressive opening drive with Cousins throwing a 15-yard touchdown to Alexander Mattison.

Their defense also started strongly and forced the Saints to punt twice, the second of which ended with Cine’s awful injury. After Mathieu’s interception, the Saints tied the game up early in the second quarter with Andy Dalton throwing a five-yard touchdown to rookie wide receiver Chris Olave.

The game went down to the wire with the Saints tying the game with a 60-yard Wil Lutz field goal before Greg Joseph gave the Vikings the lead. Lutz had a 61-yard attempt to send the game to overtime with the final kick only for his effort to bounce off the left upright and off the crossbar before falling short.

The Vikings entered the game 2-1 after a comeback win against the Detroit Lions last week. The Saints, however, entered the game 1-2 and without several offensive stars including starting quarterback Jameis Winston, running back Alvin Kamara and top wide receiver Michael Thomas.

Haitian-born defensive back Cine, 22, was the Vikings’ first round draft pick this off-season, being taken 32nd overall after an impressive college career with the Georgia Bulldogs. His injury appears almost certain to prematurely end his rookie season.