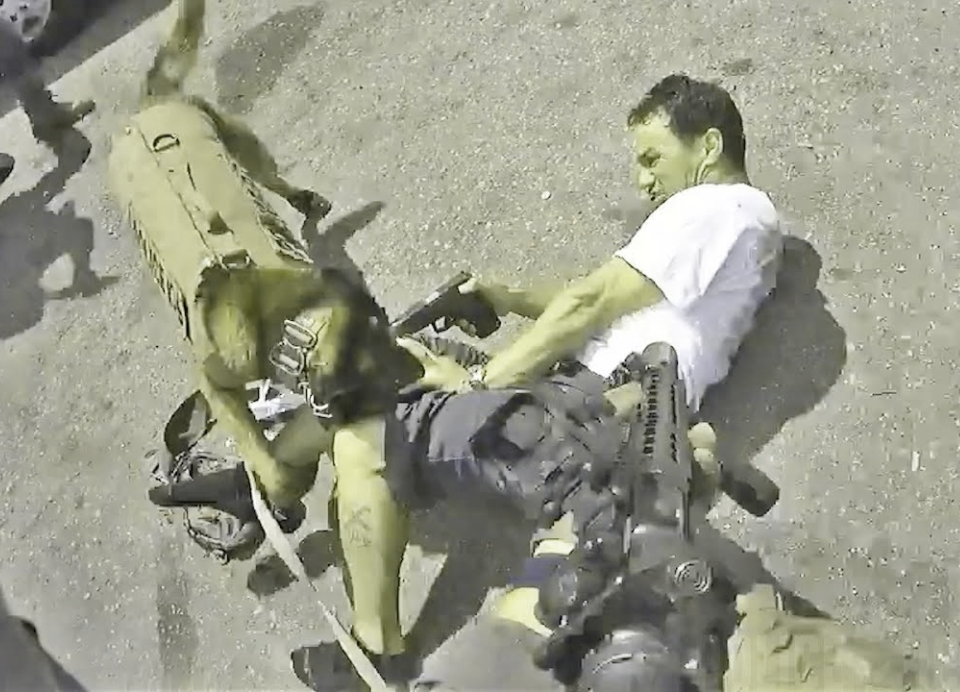 Body-camera footage shows a man in Arizona being shot dead by police after he pointed a gun at the head of a police dog in August.

Francisco Javier Galarza, 49, was being surveilled by the Tucson Police Department SWAT officers in connection with active felony arrest warrants for home invasion and bank robbery, police said, according to The Arizona Daily Star.

The video shows Galarza exiting a convenience store, at which police officers approach him and tell him to get down in order to arrest him.

Galarza starts to run away and pulls out a handgun, at which point a police dog pursues him and trips him up.

The Arizona Daily Star reported that the K-9 dog, Kiro, was released by Officer Barrie Pedersen, a 17-year TPD veteran.

Galarza falls to the ground and can be seen pointing the gun at the dog’s head before police shoot him.

Police said that Galarza pointed a firearm at officers, which caused Pedersen and Officer Ernest Ortiz, a 15-year TPD veteran, to discharge their weapons, the paper reported.

When emergency services arrived, Galarza was pronounced dead at the scene, police said.

“This incident was related to an officer-involved shooting,” the Tucson Police Department said in a statement to Insider.

The department said it does not investigate itself on a criminal level and that The Pima County Sheriff’s Department will be the investigating agency.

“Due to the internal investigation that is still open and ongoing, this is the only information we are able to provide at this time,” the statement said.