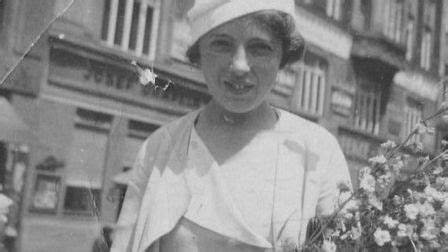 The family of a beloved gran who survived the Holocaust only to be strangled in a London hotel room are still battling for justice 50 years on.

No one was ever convicted of the brutal murder of 68-year-old Emmy Werner, who was staying at the hotel after a theatre trip with friends.

Her killing was a new and terrible trauma for daughter Hedy, who was just 17 when she and Emmy, then 41, were liberated from a concentration camp.

Of the 1,001 Jews sent to the Terezin camp near Prague from Brno in Czechoslovakia on the same day in April 1942, only 56 survived. Emmy’s husband Albert was among those killed, one of more than 77,000 Czech Jews slaughtered by Nazis in World War Two.

Granddaughters Suzanne and Carolyn Franks know they are unlikely to get justice for Albert, but they refuse to give up on their grandmother’s unsolved case. They want detectives to see if new DNA technology can help crack the mystery.

Suzanne, 65, remembers being told evidence was preserved from the crime scene and is calling on the police to carry out new forensic examinations.

She said: “For my grandmother to have survived such horrors during the war. To have lost her husband. To have had such an incredibly difficult time afterwards, in and out of mental hospitals. To have survived all that for this to happen to her, I still feel angry about it today.”

Emmy was found dead by a chambermaid at Queens Hotel in Bayswater, London. She had been strangled by an attacker who police believe had tried to steal from her as she slept on the night of September 16, 1972.

A 16-year-old hotel porter was charged only weeks later, but he was cleared of murder at a trial in February 1973.

Suzanne, a university lecturer from London, feels her grandmother was badly let down by the original detectives.

She said: “The police botched the investigation from the start. They were incompetent in the way they handled the case and the after-care they gave to my mother was shocking.

“They didn’t even tell her there was going to be a trial. I can’t remember how we found out, but it wasn’t through the police. They clearly didn’t follow all the leads. They just rushed in and arrested a hotel porter. It’s clear he wasn’t the right person. The evidence against him was pretty flimsy and then of course the trial fell apart.”

In 2017, Suzanne and her sister Carolyn, 63, contacted the police, calling for a review of Emmy’s case. Detectives reopened their inquiries and even put up a £20,000 reward for information leading to arrest and prosecution.

Suzanne said: “I’d been wanting to go to the police for many years, but didn’t want to upset my parents, who had found the whole thing so traumatic.

“It was just such a painful and sore wound to open. But then my father died and my mother was getting towards the end of her life, so my sister and I thought it was now or never. We asked my mother if she would be happy for us to go to the police and she said yes.

“We’d never talked about it before, but I think she wanted answers just as much as us. She wanted closure before she died and that’s what we all want.”

Suzanne, who has three children, added: “The police did take a look at the case again. They interviewed a number of people and I did feel that they were taking it seriously.

“But they didn’t carry out any forensic analysis. We had been told that there had been some traces on things that had been preserved that could be analyzed, but that the backlog of forensic examinations was too big.

“That was a huge disappointment. You hear about decades-old crimes being solved thanks to DNA and it always makes me think, ‘Why can’t our case be solved too?’

“I don’t know if the quality would still be good enough all these years later.

“But until these forensic tests have been done I won’t feel like no stone has been left unturned.”

Suzanne was a 15-year-old schoolgirl living in Bedford when her grandmother was murdered. “I remember it vividly,” she said. “I was at school when the police phoned my mother. Emmy and her husband Albert on holiday long before the war

“She came to the school to tell them she had to go to London and wouldn’t be at home when I got back from school. I just happened to be taking the register to the school office and saw my mum and she told me.

“Dad was away and I insisted on going with her to identify my grandmother’s body. We went on the train. It was only when we got there that we found out this wasn’t just that she’d died of a heart attack or something – she had actually been murdered. It was like a two-step shock, first finding out that she had died and then finding out it was a murder. It was absolutely horrendous. I didn’t go in with my mother to identify the body, I was kept in another room.

“But I remember it as being incredibly grim. It was a very, very black day.” She added: “My mum had to stay for hours to answer questions from the police and I got the train home to look after my younger sister.

“By then it was on the front page of the Evening Standard and I remember looking at the paper and feeling just completely sad. I’ve still got that front page today. The way she died still upsets me. I won’t go near that part of London. It holds too painful memories.” Suzanne’s mother died in 2018, aged 90, without the breakthrough she so desperately sought. But Suzanne’s fight for justice continues.

She said: “My family deserves closure. If you know something about this, if somebody has revealed something over the years, surely you are duty-bound to tell the police?

“We have suffered under this cloud for all these years. The least somebody could do is come forward with the information to help get justice for my grandmother.”

A police spokesman said: “The Metropolitan Police Service remains committed to solving the murder of 68-year-old Emmy Werner who was brutally murdered in Queens Hotel, Inverness Terrace, W2, on 17 September 1972. As with any unsolved murder, we will act on any new information we are given and carry out regular reviews of the case.”

Murder victim Emmy, her dentist husband Albert and their daughter Hedy had lived a comfortable middle-class life in Brno, Czechoslovakia, before the war.

More than half were sent on to Ausch­witz and other extermination camps. Of 15,000 children in Terezin, fewer than 150 lived.

One of them was Hedy. She never spoke to daughter Suzanne about her experiences. But she did talk to the Shoah Foundation, which collects survivor testimony. Two years after Hedy died, Suzanne found the courage to watch the interviews.

She said: “I learned that my mother had a very narrow escape. She had been due to be trans­ported to Auschwitz but had a hysterical fit and the transport left without her.”

Hedy’s father was not so lucky and in February 1945 he died at the Dachau camp in Germany. Emmy and Hedy were freed that May, and moved to London in September 1946.