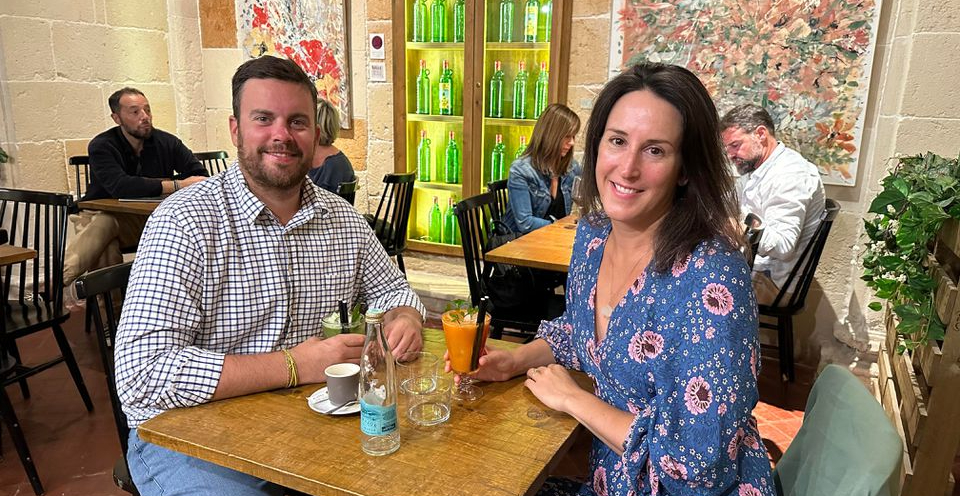 A newlywed couple on their honeymoon are being hailed as heroes for saving 20 babies from a burning nursery in Spain.

David Squillante and Doran Smith, both 38, of Bristol, Rhode Island, were on their way to a park tour in Barcelona on September 28 to celebrate their belated honeymoon when Smith noticed women screaming from a flaming nursery entryway, causing the pair to jump into action.

Squillante, 38, immediately ‘dropped his backpack and ran across the street’ into the building from a different entrance.

‘I just ran in and saw a bunch of babies sleeping and screaming,’ Squillante, who comes from a family of firefighters, told reporters.

The groom, who speaks very little Spanish, said ‘instinct took over’ as he ran into the burning building and straight into the smoky playroom.

Smith, who married Squillante in 2020, told reporters that she didn’t know how the fire started or how long it was going on before the couple arrived, but they believe it was an ‘electric fire in the walls.’

‘It did seem like we walked by right when the chaos was starting though.’

Squillante began placing around 20 children into cribs as the smoke got heavier and wheeling them out to his new wife, all while trying to calm the nursery staff.

He found one of the children in a playhouse and handed the child off to his partner, who said the baby seemed frightened but wasn’t crying like the others and squeezed her finger when she held them.

Smith said that the staff likely hadn’t evacuated the building yet because ‘there weren’t flames in the nursery.’

‘I think the staff was just trying to figure out where the smoke was coming from and trying to decide what to do.’

‘We couldn’t speak the language, but there was a universal language – we were all just trying to help,’ Smith, who is a software engineer.

As others jumped in, they started passing babies down a line out of the building and into a local high school across the street. The whole process took around 10 minutes, the couple said.

The honeymooners left soon after the firefighters arrived and believe no one was injured.

The couple then went straight to their park tour, showing up about 30 minutes late.

The surreal experience didn’t hit them until later, they said.

While on the tour, they turned to each other and said, ‘remember that time we saved a bunch of babies?’

‘It felt like we watched it in a movie, it just didn’t feel real,’ Squillante, who works in food sales, told the Globe.

Smith said the moment her husband ran into the building without a second thought was when she realized he was the person to have around in an emergency.

Squillante has a knack for being in the right place at the right time – as this wasn’t his first experience saving lives by accident.

In another close save, he and a paramedic stopped a man from jumping over an overpass, all while Squillante was just cruising around on unfamiliar roads on his motorcycle.

The selfless bystander also once went out in the rain to help find his friend’s missing dog – only to locate a man passed out while on a bike ride, and the missing pooch.

Since the fire, the food salesman said he is looking into following in his father and grandfather’s footsteps and becoming a volunteer firefighter.