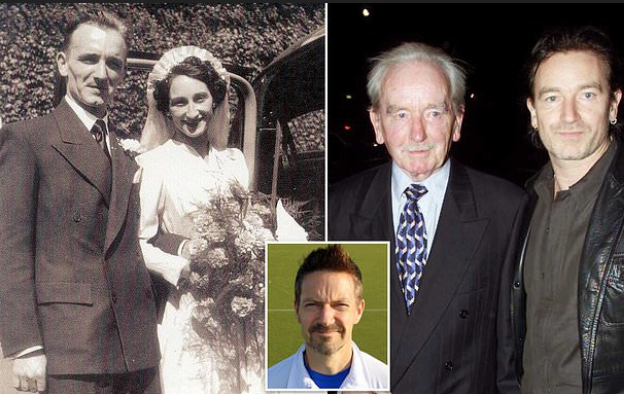 Rock star Bono has revealed that one of his cousins is actually his half-brother.

The shock disclosure comes four months after the U2 frontman first revealed he had a sibling, whose parentage had been kept a family secret for decades.

Appearing on Radio 4’s Desert Island Discs in June, Bono told host Lauren Laverne that his half-brother, whom he did not name at the time, was born following an affair in the 1960s between his father Bob and a ‘gorgeous woman’.

Now he has revealed that woman was his aunt Barbara and that their child is Scott Rankin, a stock market analyst and civil servant.

Bono’s mother Iris died in 1974, when the musician was 14, never knowing about the infidelity.

Barbara, who is still living in Dublin, was married to Iris’s brother, Jack, who died in 2020.

Exposure of the affair between Bob and Iris at the time in conservative, Catholic Ireland would have brought potentially life-shattering consequences, so instead it remained buried for decades.

And Bono – whose real name is Paul Hewson – only learnt of his father’s devastating secret in 2000, a year before Bob died of cancer.

In an interview with the Irish Times yesterday, Bono, 62, spoke of his affection for Mr Rankin, a father-of-three in his early 50s, and told how he had suspected they were more than cousins.

‘We felt like brothers long before we knew we were,’ he said. ‘I love Scott and his mother Barbara. I must have known that something was up, and I must have held my father responsible for kind of making my mother unhappy in the way kids just pick up things.’

Bono told Desert Island Discs that learning of his brother’s existence helped him make sense of his father’s behaviour at the time of Iris’s sudden death.

‘My father was going through a lot,’ he told the programme.

‘It’s a very close family and I could tell my father had a deep friendship with this gorgeous woman who was part of the family, and then they had a child and this was all kept secret.’

Mr Rankin’s professional career could not be further from Bono’s – he is believed to have worked for Davy Group, Ireland’s largest stockbroker, for more than 15 years, before becoming a civil servant with Ireland’s department of finance.

Olive Bryan, Iris’s younger sister, appeared pained when approached by this newspaper after the Desert Island Discs revelation. ‘I’d rather not talk about it as it’s far too personal,’ she said.

Trevor Stunt, another of Bono’s cousins, said: ‘Bono and the half-brother have a great relationship.

It’s a positive thing, there’s no animosity.’ He added that some family members were in the dark about the affair until just before the Desert Island Discs episode aired.