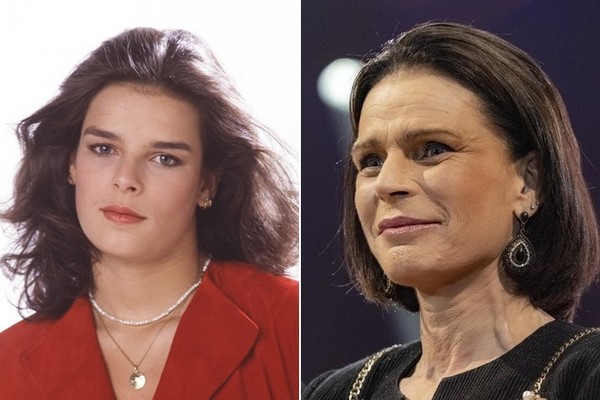 The youngest daughter of Grace Kelly, the Oscar-winning Hollywood actress who married into Monaco’s royal family, has lived an extraordinary and unusual life.

Born to Princess Grace and Prince Rainier III of Monaco, Princess Stéphanie was used to being in the glare of the public eye from childhood. But the attention intensified in 1982, when the Princess and her mother’s car plunged off the side of a 100-foot cliff, killing Grace and leaving Stéphanie, who was just 17 years old at the time, with several injuries. In the years following the crash, the young Princess earned a reputation as a royal rebel. Years later, in an apparent effort to explain, she said: “I realized how lucky I was to have life. I had my arms open to the future and I said to myself: ‘This could be all over tomorrow.’ Nobody has really tried to understand me or my behavior, which just reflected my decision to enjoy life to the full.”

For Stéphanie, living life to the full meant embracing a glamorous lifestyle which saw her date a string of high-profile men as she pursued careers in various creative fields. Brittani Barger, editor at Royal Central, explained “She tried modelling, fashion, tried to make it as a pop star — she released music.” The Princess even collaborated with Michael Jackson on his 1991 single In the Closet.

In 1989, as she launched an eponymous perfume, she said: “I’m quite happy to perform my official duties. But on the other hand, I’ve always wanted to be independent and to have my own career.”

Acknowledging she had “tried everything”, she added: “I’ve had an unusual career path for a princess.”

Stéphanie seemingly adopted the same colorful approach to her love life, before eventually settling down with her former bodyguard Daniel Ducruet, whom she married and had two children — Louis and Pauline — with. However, the marriage did not last and, only 18 months in, the couple divorced. Three years later, Stéphanie welcomed her third child, Camille, whose father was a mystery at the time, although reports later named him as bodyguard Jean-Raymond Gottlieb.

Then, in 2001, with her three children in tow, Stéphanie stepped further away from convention. Ms Barger explained: “She just went off and joined the circus, with her kids.”

The Princess had fallen in love with elephant trainer Franco Knie after they met at Monaco’s annual International Circus Festival in 1999. “She joined circus life, moved into a caravan and travelled around Switzerland, where her boyfriend was from,” the royal commentator said.

However, while love blossomed between Stéphanie and Franco, there were concerns about the Princess’ children. Phil Dampier, a long-time royal journalist, appeared in Channel 5’s documentary ‘The Curse of Grace Kelly’s Children,’ which was released last year.

He said: “Obviously it was not ideal for her children, it was very difficult for them to get educated.”

Ms Barger echoed these considerations, saying: “It was not easy for the children, who were away from home, the rest of the family and school.”

When Stéphanie left Monaco to join the circus, her eldest, Louis, was nine years old, Pauline was seven and Camille was three. “They were young too, they weren’t yet of an age where they could look after themselves — they needed looking after,” Ms Barger said.

However, Bidisha SK Mamata, a British filmmaker and journalist who began covering royals after making several Princess Diana documentaries, claimed circus life may have been Stéphanie’s way of educating her children.

She told Insider last year: “Stéphanie was showing her kids another life is possible and that adventure and romance and following your whims is just as important as knuckling down to whatever the royal family expects you to be.”

Monaco’s royal family have never publicly commented on Stéphanie’s relationship with Franco, but according to royal biographer Angela Levin, they were not supportive.

Ms Levin claimed Caroline, Princess of Hanover, Stéphanie’s older sister, was “devastated” by her younger sibling’s behaviour. She told the Channel 5 documentary: “She felt she was letting the whole family down.”

Ms Barger told Express.co.uk: “They didn’t really understand Stéphanie’s behaviour,” adding that the Monegasque royal family “are extremely private and are difficult to get information from”.

In the documentary, Mr. Dampier said the “novelty” of her relationship with Franco eventually wore off. In 2002, their romance came to an end and the Princess and her children returned to the royal fold.

But in 2003, Stéphanie had another relationship with a different circus performer, a Portuguese acrobat called Adans Lopez Peres. According to a report in Hello! Magazine at the time, the Princess met Adans at the 2001 annual International Circus Festival in Monaco.

The mother-of-three left the Royal Palace in Monaco to live with Adans in his mobile home. In September 2003, they got married in a secret ceremony in Switzerland. A Palace spokesperson said at the time: “It happened in a village near Geneva. It was a private ceremony and neither family was present.”

However, less than a year later, their union also hit rocky waters, with the trapeze artist moving out of the family home. In November 2004, they filed for divorce.

Stéphanie, now 57, never remarried. According to Mr. Dampier, the Princess has reached a stage in her life where she is content dedicating her time to her children and her philanthropic endeavors.

He said: “She’s very much involved with charity work and her AIDS charities and animal charities. I think Grace would be pleased that the ‘wild child’ has finally grown up.”

She is the younger sister of Prince Albert II and Caroline, Princess of Hanover, and is currently 14th in the line of succession to the Monegasque throne. Her children — now 29, 28 and 24 — do not hold royal titles and have followed in their mother’s footsteps by pursuing careers outside of the royal family.

Louis trained in sports management, Pauline was a competitive diver and set up her own gender-fluid fashion label, and Camille is a budding philanthropist, having started a charity, Be Safe Monaco, which aims to raise awareness of the dangers of drunk driving.

Last year, Pauline opened up about what it was like living in a caravan with a travelling circus. “That was random,” she reflected. “But it was interesting and I was outside with animals all the time. I was with kids from all around the world — German, English, Italian, Spanish — and we had our own little language. It was a moment of pure freedom that I don’t think a lot of kids get to have.”

When the royals returned to Monaco, after Stéphanie’s relationships with Franco and Adans, naturally, Pauline decided to become an acrobat herself. She confessed: “I wanted to wear leotards with sparkles.”

She graduated to diving and competed in the World Junior Diving Championships and the Summer Youth Olympics.

Noting the contrast between the circus and watching her mother dress up for the formality of life in the south of France, Pauline said: “It was amazing to be so up and down.

“It builds up your character and experiencing all those things makes you a stronger person. I understand [that my upbringing was unusual] and I cherish it. I’m grateful to have had the childhood I did.”