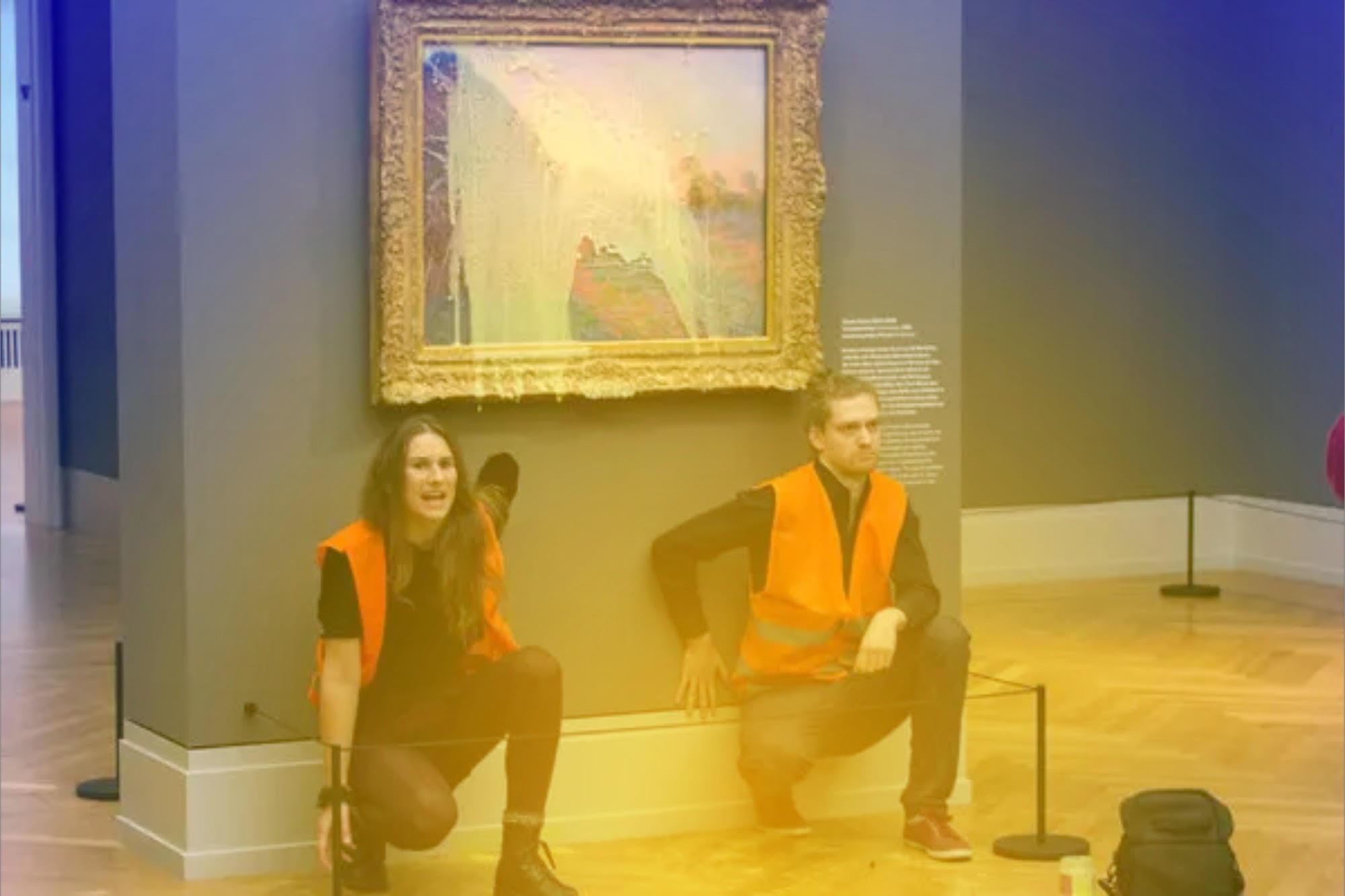 Police arrested a pair of German protesters who, in a bid to bring attention to the perils of climate change, threw mashed potatoes Sunday at a Claude Monet painting that once sold for more than $110 million.

Authorities said they are investigating the protesters, whom police did not name, for property damage and trespassing after the incident at the Barberini Museum in Potsdam, the capital of the state of Brandenburg, about 20 miles southwest of Berlin.

An “immediate conservation investigation” found that “Grainstacks,” which Monet painted in 1890 and which sold for $110.7 million at a 2019 auction, sustained no damage from the stunt, as it lies behind a layer of protective glass, the museum said in a statement on Twitter. The painting will be back on display by Wednesday, the museum added.

A Brandenburg police spokesperson did not immediately respond to a question about why the protesters were being investigated for property damage given that the painting was unharmed.

Video posted to the Twitter account of the Last Generation, the German climate group that claimed responsibility, shows two protesters hurling mashed potatoes at the painting and then kneeling in front of it and seeming to glue their hands to the wall.

The stunt was similar to one this month at London’s National Gallery, where two protesters from the U.K. group Just Stop Oil threw what appeared to be tomato soup at Vincent van Gogh’s painting “Sunflowers,” which sold for nearly $40 million in 1987, to protest the country’s cost-of-living crisis. That painting was also behind protective glass and unharmed, according to the museum.

On Sunday, the German activists referred to the U.K. protest as they carried out their own.

“We are in a climate catastrophe. And all you are afraid of is tomato soup or mashed potatoes on a painting,” one of the protesters says, according to an English-subtitled version of the video.

“This painting is not going to be worth anything if we have to fight over food,” the protester adds.

A report released this year by the U.N.’s Intergovernmental Panel on Climate Change warned that urgent action is needed “to secure a livable future” in the face of climate change, which is already worsening food and water insecurity, and weather events like heat waves, droughts and floods, according to the report.

The Last Generation tweeted out a video of the incident Sunday with the caption: “We make this #Monet the stage and the public the audience. If it takes a painting — with #MashedPotatoes or #TomatoSoup thrown at it — to make society remember that the fossil fuel course is killing us all: Then we’ll give you #MashedPotatoes on a painting!”

Ortrud Westheider, the museum’s director, said in a statement that while she empathized with the protesters’ concerns, “I am shocked by the means with which they are trying to lend weight to their demands.”

“It is in the works of the Impressionists that we see the intense artistic engagement with nature,” Westheider added, referring to the 19th century art movement that Monet’s works are part of.

“Grainstacks” is one of a series of 25 paintings in which Monet depicted the grain stacks in fields near his home in Giverny, France, painting them in different light and weather conditions, according to the museum.

Born in 1840, Monet was the leading French Impressionist landscape painter, according to the National Gallery.

CORRECTION (Oct. 24, 2022, 8:20 a.m. ET): A previous version of this article misstated where Potsdam is located in Germany. It is southwest of Berlin, not southeast.