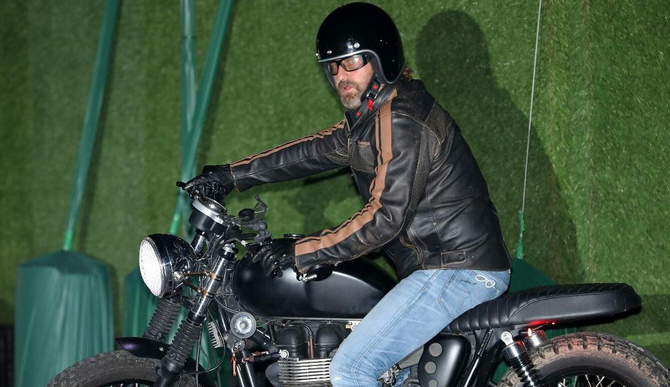 Actor Gerard Butler has made a potentially generous offer to the woman who allegedly caused him to crash his motorcycle and almost lose his life!

In the offer, obtained by, Gerard Butler offers to settle with the woman who allegedly cut him off while he was riding his motorcycle “for payment of the sum $5,250,000.00, in exchange for a dismissal of the entire action with prejudice and a full release of all claims against Defendant Leah Sherman.”

He also states that if she “accepts this offer, date and sign the accompanying Notice of Acceptance, and serve the Offer and Notice of Acceptance in the above-entitled action prior to trial or within 30 days after the offer is made, whichever occurs first, or else it will be deemed withdrawn.”

As we previously reported, Gerard Butler filed the original lawsuit two years ago, and he claimed the accident was so severe, he is lucky to be alive!

The accident happened five years ago in October 2017.

The “300” actor claims Leah Sherman was in her 2016 Mercedes Benz, attempted to cut across lanes, and while doing so, he “had no time to stop or evade Defendant’s vehicle, resulting in him striking Defendant’s vehicle on the driver side.”

Butler says the impact caused him to be ejected from his motor cycle and tumble up and over Sherman’s vehicle and back onto the pavement. He claims the force of the impacts caused him to sustain “catastrophic injuries.”

Paramedics arrived on scene and treated him before transporting him to a nearby hospital.

Butler spoke about the lawsuit, saying “I’m lucky to be here. I went 33 feet through the air.”

He continued, “I did a somersault,” and he says he had “five fractures in my right foot alone, because I landed right on my knees, so I’ve done my knees in and my left foot. And this had been the busiest period of my career.

Butler was willing to settle the whole case for a cool $5.25 million, and would’ve dismissed the lawsuit entirely. He is due back in court in December of this year to determine if the case will go to trial. Leah Sherman has a few weeks to decide if she will take  Butler’s offer.

This accident wasn’t the actor’s first close call with death.

In 2011, Butler was rescued from the ocean following a surfing accident.

The actor was pulled underwater and dragged over a rocky reef in 2011 by a large set of waves while he was filming the surfing movie “Of Men and Mavericks.”

He was taken to the hospital, but left with no serious injuries.

Butler is very much a daredevil.