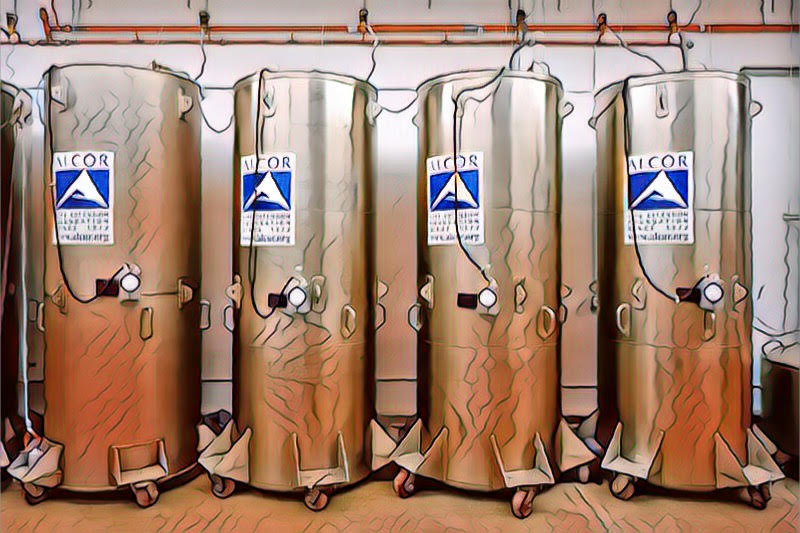 Amid the hot desert landscape of Scottsdale, Arizona, some people would rather be frozen—literally.

To date, 199 people have had their heads and bodies cryopreserved at the Alcor Life Extension Foundation facility in hopes of being revived later. By preserving bodies at below-freezing temperatures, Alcor’s goal is “restoring good health with medical technology in the future,” according to the non-profit organization’s website. Packed together, cylindrical tanks filled with liquid nitrogen hold the heads and bodies of human “patients”—as the foundation calls them—plus about 100 preserved pets, reports Liliana Salgado for Reuters.

Some of the patients had terminal cases of diseases that lack a present-day cure, such as cancer or ALS. Max More, former CEO of Alcor who now serves as an ambassador and president emeritus of the foundation, tells Reuters that modern medicine and technology are insufficient to keep people alive as they’re nearing death.

“We’re saying instead of just disposing of the patient, give them to us,” More tells Reuters. “We’re going to stabilize them, stop them getting worse and hold them for as long as it takes for technology to catch up and allow them to come back to life and continue living.”

Several medical and legal professionals have long been skeptical of human cryopreservation—or hostile to it, Peter Wilson reported for the New York Times last year. Clive Coen, a neuroscientist at King’s College London in England, tells MIT Technology Review‘sLaurie Clarke that cryonics is “a hopeless aspiration that reveals an appalling ignorance of biology.”

But for those that participate, the cryopreservation process begins as soon as a person is declared legally dead, according to Alcor’s website. At this time, their organs are still viable. Acting quickly, a cryonics team that has usually been on standby, awaiting the patient’s death for up to a week, moves them to an ice bath replaces their blood with an organ-preserving solution. Once the patient arrives at Alcor’s Arizona facility, the team releases cryoprotectants, or chemicals that prevent the formation of ice crystals that may damage organs, into the patient’s bloodstream. Alcor cools the body to minus 320.8 degrees Fahrenheit and stores it in a tank filled with liquid nitrogen.

Here’s the catch: No cryonics organization knows how to bring life back to its preserved patients. Per Alcor, the non-profit has “confidence revival may be possible.”

Founded in 1972, Alcor performed its first human cryopreservation in 1976.But the first-ever human to be frozen like this was preserved nearly a decade prior, when psychologist James H. Bedford died in 1967 at age 73 from kidney cancer. Bedford’s body was put on ice and processed by “experts from the Cryonics Society of California,” as The New York Times Magazine wrote in 1997.Bedford’s body has been frozen ever since and now rests in one of Alcor’s tanks.

The youngest of the patients at Alcor is two-year-old Matheryn Naovaratpong, a Thai girl with brain cancer, who was cryopreserved in 2015, reports Reuters.

“Both her parents were doctors, and she had multiple brain surgeries,” More tells the publication. “Nothing worked, unfortunately. So, they contacted us.”

Other patients at the facility include software developer and Bitcoin pioneer Hal Finney, who died in 2014 from ALS, and baseball Hall of Famer Ted Williams, who died in 2002 from heart disease complications. Cryopreservation for an entire body at Alcor costs at least $200,000, and it costs $80,000 to preserve just a brain, per Reuters.

Despite there being no evidence that human cryopreservation actually works, cryonics advocates remain hopeful and cite scientific advances in which sperm, embryo and stem cells can be cryopreserved and thawed successfully, reports MIT Technology Review. In 2016, researchers at 21st Century Medicine cryopreserved and thawed a rabbit brain without causing structural damage, Aaron Frank wrote for Vice at the time.

But Coen tells MIT Technology Review it’s “disingenuous” to claim these studies could translate to human cryonics, adding that the human brain’s structures are too complex for this to work.

“This notion of freezing ourselves into the future is pretty science-fiction, and it’s naive,” Caplan says to Reuters. “The only group… getting excited about the possibility are people who specialize in studying the distant future or people who have a stake in wanting you to pay the money to do it.”