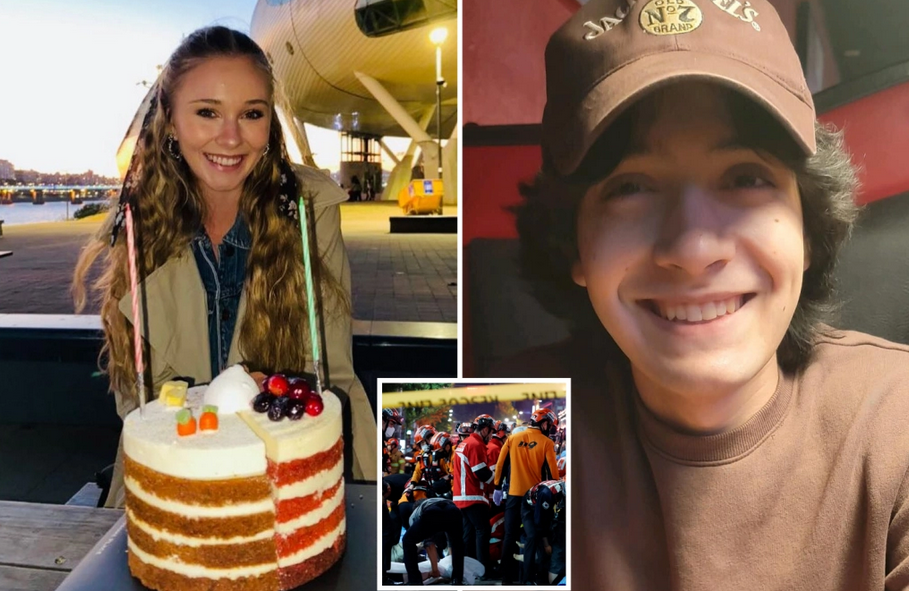 At least two American students were among the 153 people killed in the tragic stampede during a Halloween celebration in Seoul on Saturday night.

At least 153 people were killed and another 82 were hurt when 100,000 revelers celebrating in South Korea panicked, sparking a huge stampede.

Gieske, a nursing major, was in the city for a study abroad program, according to a statement by University of Kentucky officials.

There were also two other students and a faculty member in the area, but they are safe and accounted for, university president Eli Capilouto said.

The president wrote: “There aren’t adequate or appropriate words to describe the pain of a beautiful life cut short.

“It is loss and it hurts in ways that are impossible to articulate.”

Dad Steve Blesi, 62, was notified of the crowd surge by his brother early on Saturday, motivating the family to try and get in touch with their child for hours, he told the New York Times.

Eventually, the US Embassy reached out to Blesi and gave him the horrifying news that no parent should hear.

“I texted him maybe a half-hour before all this happened, and I said, ‘I know you’re out and about. Be safe,” Blesi said.

“I never got a reply to that.”

Gieske shared a tragic post celebrating her 20th birthday with a huge cake at a restaurant on the Han River just moments before the fatal accident.

Her dad, Dan, told NBC News the family were “completely devastated and heartbroken” by the loss of their daughter – describing her as “bright light loved by all”.

Grace Rached, 23, a Sydney-based producer who had been travelling in the lead-up to her birthday, also died in the crush, 7News reports.

Grace’s family said their “beautiful Grace” was the “life of the party”.

“We are missing our gorgeous angel Grace who lit up a room with her infectious smile,” they said.

“Grace always made others feel important, and her kindness left an impression on everyone she ever met. Grace always cared about others, and she was loved by all.

“Grace was a talented film producer who was passionate about making a difference.

“She cared deeply about her two sisters and was a wonderful role model. Grace showed us all what it meant to be an incredible human being.

“We will all deeply miss our beautiful Grace, our life of the party.”

In a heartbreaking TikTok video, Grace’s friend Nathan Taverniti described how he “was there when she said she couldn’t breathe”.

Nathan said: “There was no stampede. It was a slow and agonising crush. My friends were being crushed in front of me and I couldn’t do anything about it.

“This crush was not caused by drunk people. It was a lack of planning from the police force and emergency services, and nobody was willing to help.

“I watched as people sang and filmed and laughed while my friends were dying, along with many other people.

“Nobody was doing anything to make the crowd stop.”

He told Yonhap News Agency: “People need to know how bad it was and how little help there was.”

Olivia Jacovic, a 27-year-old Australian living in Seoul, was caught up in the stampede and managed to escape.

She told Channel Nine: “It was just shoulder-to-shoulder, people couldn’t breathe the shorter people were trying to look up in the air to get some air.”

Excited teenagers and young adults had poured into the capital to enjoy the first unrestricted Halloween celebrations in three years since Covid regulations were lifted.

But instead, they found themselves caught up in a terrifying stampede as the festivities had attracted a dangerous amount of people.

Witnesses say the crowd became increasingly “agitated” as the evening went on.

Shortly before 10.20pm, the situation became out of control as a stampede broke out as people were forced down the tight, sloped alleyway after it was already packed wall-to-wall with people.

Those at the top of the 147ft long pathway started to fall, sending people below them toppling over others.

Panicked revelers became trapped and struggled to breathe before many went into cardiac arrest.

Horrifying footage shared on social media showed some people trying to scale the sides of the buildings to escape the increasing pressure, as others desperately cried out for help.

One witness described the number of bodies piling up as looking like a “tomb.”

Despite the horror unfolding just 320ft from the closest fire station, emergency workers were faced with a battle to reach victims because of traffic congestion and overcrowding.

Victims and their relatives had questioned an apparent lack of crowd control.

Park Jung-hoon, 21, told Reuters from the scene: “You would see big crowds at Christmas and fireworks but this was several ten-folds bigger than any of that.”

With the easing of the Covid pandemic, curfews on bars and restaurants and a limit of ten people for private gatherings were lifted in April. An outdoor mask mandate was dropped in May.

Professor Lee Young-ju from the Department of Fire and Disaster at the University of Seoul said the disaster could have been “prevented or controlled”.

He told broadcaster YTN: “District events held by local governments or institutions have to have safety plans and measures if more than 1,000 people are expected to participate.

“But this was a district event without a specific organizer, lacking the safety control function.

“This was a disaster that could have been controlled or prevented.

“But this was not taken care of, with no one taking the responsibility in the first place.”

Interior Ministry Lee Sang-min said police had deployed additional personnel as they did not expect Halloween crowds to be much larger than in other years.

He said that cops were focused on controlling crowds at large-scale protests in other areas of Seoul on Saturday.

In the wake of the incident, venues across the country have decided to pull the plug on Halloween-themed events.

Devastated relatives and friends of victims have left floral tributes at the scene.

He said: “A tragedy and disaster that should not have happened took place in the heart of Seoul last night.”