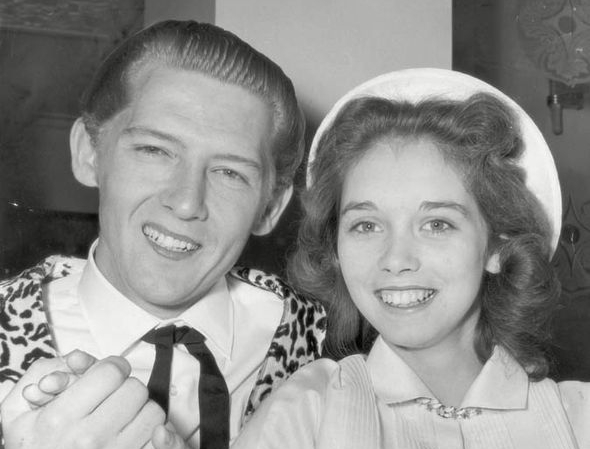 Jerry Lee Lewis’ ex-wife revealed that her father chased her new husband down with a gun when he learned when the rocker had eloped with his daughter when she was just 13 years old.

In an interview given the day after Lewis’ death, 78-year-old Myra Williams recalled how news of their controversial marriage derailed the singer’s career for years.

She also recounted how she ‘took care of everything’ during her 13-year marriage to Lewis, who was also her first cousin once removed and nine years her senior.

Lewis, one of rock and roll’s earliest pioneers, died at 87 years old on Friday. He soared to fame alongside stars like Elvis Presley, Roy Orbison, and Johnny Cash with hits like Great Balls of Fire and Live at the Star Club, Hamburg.

But his ascent up the charts ground to a halt when news of his marriage to Williams broke a year after their 1957 nuptials. As Lewis was lambasted in the press, his label – the famous Sun Records – stopped promoting him and tour dates dried up for a period.

‘I was the bad thing in his life,’ Williams said in an interview with the Los Angeles Times, recalling how she and Lewis were harshly judged by the public.

The couple divorced in 1970 over ‘adultery and abuse’ as Lewis became mired in drug addiction.

Williams said that though she was characterized as a ‘child bride’ when news of her marriage to Lewis broke, inside their relationship things were quite the opposite.

‘I was called the child bride, but I was the adult and Jerry was the child,’ she told the LA Times. ‘When I look back on it, how can you defend yourself when you’re 13 years old? I mean there’s no excuse good enough for that to be OK.’

She said that the moment she became a wife she assumed all the responsibilities in the marriage.

‘I didn’t miss a beat. I took care of everything,’ she said.

Williams bought a house for the family while Lewis was away on tour, and also bought a red Cadillac convertible he requested she pick up.

‘I mean, I didn’t even have a driver’s license,’ Williams said, recalling how she ran the family’s finances.

‘I did all the work and made all the decisions and did all the running and taking care of business and that kind of stuff.’

‘One time I went to the bank with a big sack of money to deposit it… and the teller said to me, ‘Myra, there’s a policeman sitting there outside in his car and he followed you here. So when you get ready to leave, I’ll drive you home.’

Williams recalled to the LA Times how her father invited Lewis – his cousin – to stay at their home in Memphis, Tennessee so he could record at Sun Records.

Although Lewis was still married to his second wife at the time, Williams said the two fell in love and eloped.

She said when her father found out about the marriage ‘he got his gun.’

‘That was not a happy moment. Daddy felt very betrayed by that. I was his 13-year-old little girl.’

Williams told how her father chased Lewis to Sun Records, but producer Sam Phillips had already told Lewis to flee. She said Phillips calmed her father, and that when Lewis returned to town he told him ‘You better be good to my girl.’

‘There was just no choice. I mean, killing Jerry was not an option. It was his first thought, but it wasn’t an option,’ Williams said.