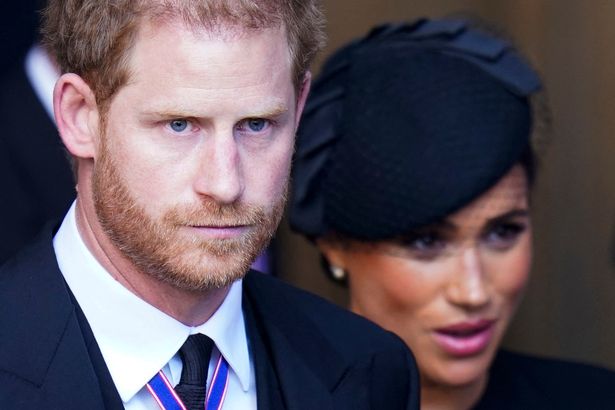 Many royal sources claim to reveal the inside story of what happened in the run up to Prince Harry and Meghan Markle’s wedding after reports of tense arguments and fallouts surfaced. Investigative journalist Tom Bower included such stories when he released his earth-shattering book ‘Revenge: Meghan, Harry and the War between the Windsors’ earlier this year.

The author spoke to 80 sources close to the couple and revealed everything from how Prince William begged his uncle Earl Spencer to speak to Harry to the changes the palace forced the writers of Suits to make after the couple’s relationship became public knowledge. But one story that rises above all others is the suggestion that Prince Harry’s friends thought he was “f****** nuts” for dating Meghan Markle after she challenged everything they said with her “woke” values.

According to Bower, Harry invited 16 of his old friends from Eton to join him at Sandringham for dinner on Friday, shooting on Saturday and then lunch on Sunday.

The author writes that Harry was “looking forward” to “endless banter” with his best friends but everyone left exhausted after meeting Meghan for the first time as she “challenged every guest who contravened her woke values”. He goes on to claim that Meghan “lacked any sense of humor” and was a “dampener on the party”.

Bower writes: “He had not anticipated Meghan’s reaction. Their jokes, involving sexism, feminism and transgender people, ricocheted around the living-rooms and dining-rooms. Without hesitation, Meghan challenged every guest whose conversation contravened her values.

“She lacked any sense of humor. Driving home after Sunday lunch, the texts pinged between the cars: ‘OMG, what about HER?’ said one. ‘Harry must be f***ing nuts’.’

Another interesting story from Bower’s book suggests that Diana, Princess of Wales’s brother, Earl Spencer, was asked by Prince William to speak to his nephew about his closeness with Meghan.

The author claims that not only did Earl Spencer and Diana’s two sisters, Lady Sarah McCorquodale and Baroness Jane Fellowes, fail to see the similarities between Meghan and Harry’s late mother – as the prince reportedly hoped – but they thought that she would struggle to fit in with the Royal Family.

Bower writes: “In early September 2017, Kate revealed that she was expecting her third child. Prone to sickness in pregnancy, she curtailed her public appearances.

“Since the Vanity Fair article had increased the Cambridges’ suspicion of Meghan, the actress discovered that her neighbour in Kensington Palace had even less time for her.

“By then, Harry had introduced Meghan to Diana’s two sisters, Jane and Sarah, and her best friend Julia Samuel. Harry assumed that Diana’s family and friends would see a similarity between Diana and his fiancée.

“Both, he said, shared the same problems. He was disappointed. No one agreed that his vulnerable mother had anything in common with his girlfriend. More discomforting for him, they thought Meghan would not fit in with the Royal Family.”

The author continued: “Their unease was voiced by Charles Spencer, Diana’s brother. At William’s request, Spencer weighed in.

“Three times married, Spencer cautioned his nephew to reconsider his haste towards marriage. His advice provoked a bitter reaction. ‘This was going to be really hard,’ Harry would later reflect on establishing Meghan’s place in the family.

“One of his recurring concerns was insufficient money if they married. Although Harry annually received about £1.5 million from Charles, Meghan had been advised to continue acting to supplement their income.

“By that point, Meghan knew from her agent Nick Collins that her acting prospects were limited. Omid Scobie, her official biographer, would accurately summaries her exit from Hollywood. ‘She wanted a more meaningful career,’ he wrote. ‘She could be doing so much more with her platform.’ Her frustration remained. She was tantalizingly close to sealing her future, but nothing was official.”

However, Bower claims that it wasn’t just Earl Spencer who openly expressed his concern over Harry and Meghan’s budding relationship. He wrote that Meghan’s former talent agent, Gina Nelthorpe-Cowne, told the actress that she “wouldn’t be able to make any more movies” with her priority set to become royal life instead.

But Meghan wasn’t impressed, claims Bower, writing: “Gina, save it,’ Meghan snapped. Nelthorpe-Cowne was taken aback by the steel in Meghan’s voice.

“Holding up her hand, Meghan continued: ‘Stop. Be quiet. I don’t want to hear any negativity. This is a happy time for us.’ Stopped in her tracks, Nelthorpe-Cowne looked at the hard fury in Meghan’s eyes.”