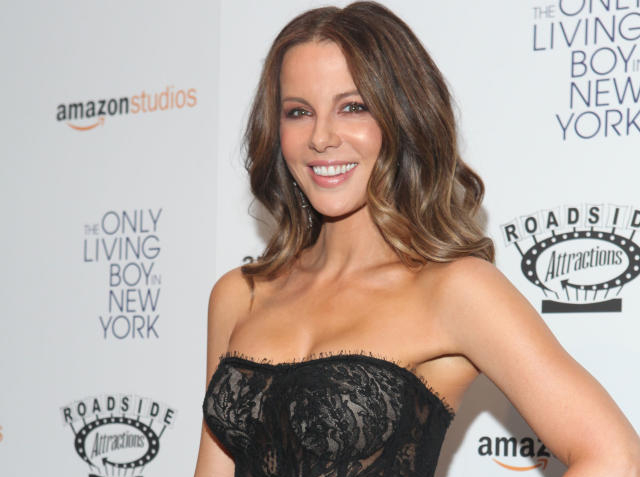 The actress, 49, was joined by a pal and a group of firemen as she posed on a public bicycle featuring the slogan, ‘Put the fun between your legs.’

In her caption, she joked: ‘I’d highly advise putting the fun between your legs if you want to quite quickly meet a clutch of Croatian firemen.’

It comes after Kate cut a casual figure as she enjoyed a shopping trip at the trendy Kitson store in Beverley Hills on Friday.

The Hollywood star looked effortlessly chic in a cream knitted jumper and a white top.

She completed the comfy ensemble in a pair of skin-tight leggings and wore a pair of stylish glasses.

Kate styled her brunette locks up in a messy bun, while opting for a light palette of makeup, showing off her natural beauty.

News about Prisoner’s Daughter’s development was revealed to the public by Deadline last January, when Kate signed on to appear in the movie.

The film is centered on a terminally ill former convict whose violent past comes back to haunt him while he attempts to reconnect with his daughter and grandson.

In addition to Kate and Brian, the movie stars performers such as Tyson Ritter, Jon Huertas and Ernie Hudson.

Director Catherine Hardwicke previously spoke to Deadline and expressed that her feature would tell a potentially troubling, yet moving story.

The filmmaker described Prisoner’s Daughter as ‘a raw, personal look at a deeply fractured family.’

The director then remarked that she began working on the project with a set intention in mind.

‘I want to fully immerse the viewer in Kate’s character’s intense world as she, her father and her young son try to heal generational family trauma and find a new way forward,’ she said.