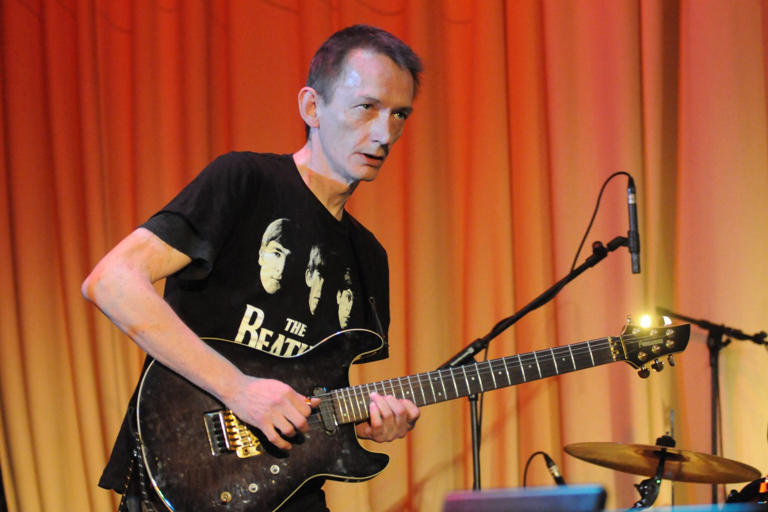 The news was first shared by writer Adam Hammond, with whom Levene had been working on a history of Public Image Ltd. in recent years, The Guardian reported.

Hammond wrote that Levene, a man he considered “one of the most innovative, audacious and influential guitarists of all time,” died on Nov. 11. Levene’s former bandmates have since paid their respects as well.

The Guardian reported that Levene, who was born Julian Levene in Muswell Hill in North London, died of liver cancer. “He’s gone, and I can’t stop crying. Now I’m a widow,” his wife Shelly Da Cunha told Variety, adding that he died peacefully. A rep for Levene could not be reached by PEOPLE for more information.

“So much of what we listen to today owes much to Keith’s work, some of it acknowledged, most of it not … The world is a darker place without his genius. Mine will be darker without my mate,” Hammond said in part via social media.

Levene founded the Clash in 1976 with bandmate Mick Jones and encouraged drummer Joe Strummer to ditch his band and join. With The Clash, Levene played on their track “What’s My Name” off of the group’s 1977 debut album. While he departed The Clash before they recorded much material, Levene eventually joined the Sex Pistols’ John Lydon in forming Public Image Ltd. in 1978.

Alongside Jah Wobble and Lydon, PiL’s work is often looked at as influential in the post-punk era following the releases of their 1978 debut Public Image: First Issue, 1979’s Metal Box, and 1981’s Flowers of Romance. He left the band in 1983 over creative differences, specifically on their fourth studio album, This Is What You Want… This Is What You Get.

“There was a lot of vitriol, but it was a magic time and I wouldn’t swap any of it,” Levene told The Guardian in 2012. “People said Metal Box was avant-garde, but we didn’t expect that in 30-odd years’ time people would be talking about a seminal record. It cost us £33,000 of our advance to put it out as three 12-inch singles in a tin shaped like a pill! Now it’s a collector’s item.”

Levene released several solo records toward the end of his career and invested heavily in Bitcoin in later years.

“RIP KEITH LEVENE,” Wobble shared to Twitter, later adding, “Thanks for all the messages of condolence re Keith …but it’s his partner and family who are really impacted by his passing 🙏👍❤️”

A sad time to learn of the passing of guitar giant Keith Levene. We had our ups and downs that had mellowed over time. My respect for his unique talent never will. @pilofficial https://t.co/IW3PTa1TOa— Martin Atkins (@marteeeen) November 12, 2022

Atkins also honored his old friend Saturday, and shared memories of the group on Twitter, specifically retweeting an image of the band from 1980 and calling his fellow PiL bandmate a “guitar giant.”

“A sad time to learn of the passing of guitar giant Keith Levene,” he wrote. “We had our ups and downs that had mellowed over time. My respect for his unique talent never will. @pilofficial“

One thought on “Keith Levene, Guitarist and Founding Member of the Clash, Dead at 65”