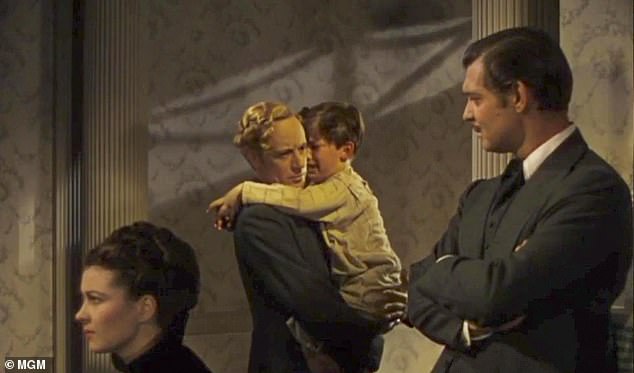 The acting world is mourning the loss of the last surviving member of the 1939 classic Gone With the Wind, Mickey Kuhn.

His wife Barbara, who he married in 1985, revealed that her husband was in good health until recently.

Kuhn was born in 1932 in Waukegan, Illinois, though his parents moved him to Los Angeles at a young age, where his father worked as a meat cutter for Safeway.

Kuhn had his first role at just 2 years of age, playing an adopted baby in the 1934 Janet Gaynor film Change of Heart, revealing in a 2008 interview with Films of the Golden Age, how he landed his first role.

‘Of course I don’t remember this day, but my mother and I were in Sears-Roebuck on Santa Monica and Western when a lady stopped my mother and said that Fox Studio was looking for twin babies for a movie they were shooting,’ he said.

‘She had a baby girl that looked a lot like me and thought we could be cast. Well, we went over there, and I, but not the lady’s baby, was cast,’ he added.

He had uncredited roles in 1937’s A Doctor’s Diary and 1939’s King of the Underworld and When Comes Tomorrow, and he attended a special school for showbiz kids dubbed the Mar-Ken School.

He also had four more credited roles in 1939, including Gone Wind, where he recalled how he learned that he landed the role.

‘I started crying and wanted to leave, but Mom said to go up and give my name to the lady at the desk. If in 10 minutes I hadn’t been called, then we would leave. I went to the lady and said, “I’m Mickey Kuhn.” She said, “Mickey, we’ve been waiting for you.” And then to the others waiting, “Thank you, we’ve cast the part. You may all leave,”‘ Kuhn recalled in the Films of the Golden Age interview.

He also played Junior in the 1945 film Dick Tracy alongside Morgan Conway as the title character and starred alongside Kirk Douglas and Barbara Stanwyck in 1946’s The Strange Love of Martha Ivers.

The young actor also starred alongside Jimmy Stewart in 1947’s Magic Town and 1950’s Broken Arrow, and alongside John Wayne in 1948’s Red River, where the acting legend actually smacked him for the role.

‘He actually hit me backhanded. He told me he was [going to do it]. He said it would look better that way. We did it in one take,’ Kuhn said.

A played a sailor in the 1951 classic A Streetcar Named Desire, though that year he also joined the U.S. Navy and worked as an aircraft electrician.

He returned to acting with 1955’s The Last Frontier, 1956’s Away All Boats and 1957 episodes of Alfred Hitchcock Presents before ending his acting career.

He would go on to work in airport management for American Airlines and he held administrative positions a Boston airport before he retired in 1995.

Kuhn is survived by his wife Barbara and their two children.