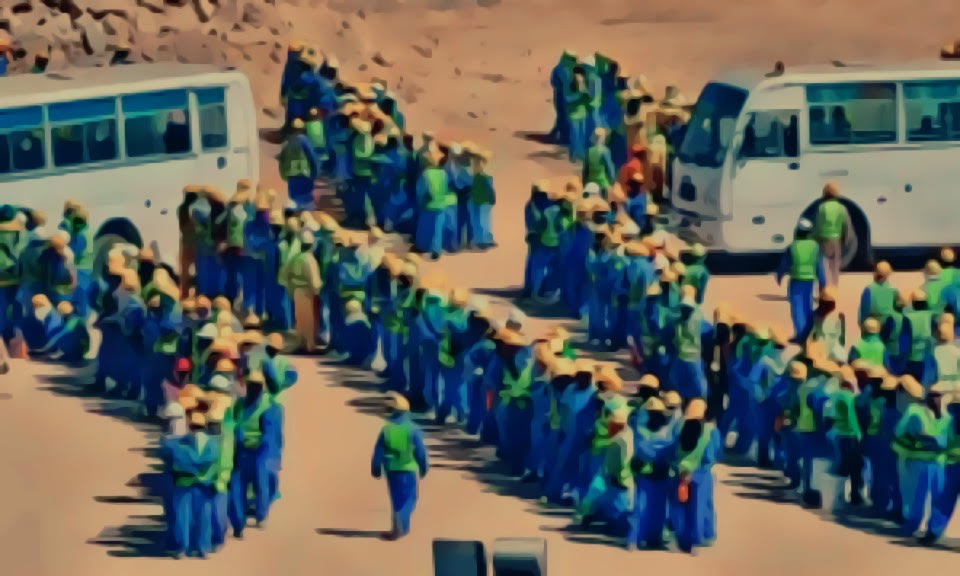 by: Liberate America StaffPosted on: November 23, 2022

For all the talk about FIFA’s commitment to ending discrimination, there does not seem to be a concern about the Qatar’s policies regarding foreign labor.

As the tournament begins we look back over a decade in which our coverage of conditions for migrant workers has been instrumental in forcing change.

In 2013, after the announcement in 2010 that the tiny but enormously wealthy Gulf state of Qatar would host the Fifa 2022 Football World Cup, the Nepal-based Guardian journalist Pete Pattisson made the first of many trips to Kathmandu’s airport in Nepal to count coffins.

For months, Pattisson traced the bodies of dozens of migrant workers repatriated from Qatar back to their families to try to establish why they never made it home alive. It was the start of 10 years of reporting by the Guardian into the sometimes brutal conditions faced by hundreds of thousands of migrant workers tasked with building Qatar’s state-of-the-art stadiums, and the roads, hotels and infrastructure needed to host one of the biggest sporting events on Earth.

With just days to go to first kick-off, we look back at how migrant rights became centre stage in arguably the most controversial World Cup in the history of the tournament.

The Guardian publishes a comprehensive investigation into worker deaths and abuse in Qatar, which finds that dozens of workers had died and others were suffering appalling labour abuses, which in some case could amount to forced labour, a form of modern slavery, as defined by the International Labour Organization (ILO). Workers were being forced to live in unsanitary and overcrowded accommodation and some said that they were not being paid and were unable to leave and return home. In response, the Qatari labour ministry says it has strict rules governing working in the heat, the provision of labour and the prompt payment of salaries. The Supreme Committee, the body tasked with organising the World Cup, told the Guardian it was “deeply concerned” with the allegations and had been told the government authorities were conducting an investigation

The Guardian reports that Qatar is facing growing international pressure to act against the rising death toll of migrant workers preparing for the 2022 World Cup, as unions warned another 4,000 people could die in the Gulf emirate before a ball is kicked. Fifa calls for an urgent enquiry and says “very concerned about the reports presented by the media regarding labour rights’ abuses and the conditions for construction workers”. A spokesman for Qatar’s World Cup organisers says they are “appalled” by the Guardian revelations and there is “no excuse” for the maltreatment of workers.

After the Guardian’s 2013 investigation, Qatari officials commit to sweeping labour reforms, including replacing the country’s kafala sponsorship system, which tethers workers to a single employer and prevents them from leaving their job or the country without permission.

July 2014
Trapped in Qatar: the migrants who helped build the ‘tower of football’

As construction on the World Cup stadiums begins, the Guardian returns to the Qatar capital, Doha, and reports that workers assigned to build the “Aspire” football complex – housing the headquarters of the Supreme Committee for Delivery and Legacy – claim they were not paid for months. In response to the allegations, Qatar’s 2022 World Cup organising committee says it is “heavily dismayed” to hear of the allegations and “will continue to press for a speedy and fair conclusion to all cases”.

A follow-up investigation finds that migrant workers building the first stadium for Qatar’s 2022 World Cup say they had been earning as little as 45p an hour. The pay rate appeared to be in breach of the tournament organisers’ own worker welfare rules and despite the Gulf kingdom spending £134bn on infrastructure in the lead-up to the competition.

The Guardian finds North Korean labourers working on large construction projects in conditions that may amount to forced labour. The investigation suggests the workers may receive as little as 10% of their salary during the three years they typically work in Qatar, with the remainder expropriated by a chain of North Korean state-run bodies, overseen by Office 39, a department that reportedly controls a fund to bankroll Kim Jong-un’s lifestyle. The Qatari authorities say that there are 2,800 North Korean guest workers registered in Qatar and they have no recorded complaints about their payment or treatment. “Qatar is determined to continually improve labour conditions for all who work in the country, and will continue to work with NGOs, businesses and other governments to achieve this,” it says in a statement.

The Guardian reveals claims of labour abuses among subsidiaries of leading British construction firms. Alleged abuses include erratic or reduced payment of wages, passport confiscation, workers entering employment with high levels of debt bondage and pay levels below those agreed when workers were recruited in their home countries. The workers spoke of a culture of fear and intimidation, with threats of arrest or deportation. Both companies say they are working within the parameters of Qatari law and rigorously monitor their labour supply companies to ensure good practice.

The Guardian finds World Cup stadium workers being paid £5 a day – a £650 a month basic salary for eight hours of work a day, six days a week. The investigation also uncovered the plight of those who say they had paid agents for visas, but whose jobs and sponsors proved to be a mirage. The supreme committee says its contractors had been instructed to pay the advisory minimum wage and after an investigation, any problems with payment had been rectified.

Despite bid committee chief executive Hassan Al-Thawadi saying in 2010 that “heat is not and will not be an issue”, the Guardian reveals that hundreds of thousands of migrant workers toiled in temperatures of up to 45C for up to 10 hours a day, potentially leading to the deaths of hundreds of workers. An analysis of weather conditions finds that it is unsafe to work outside at all in Qatar. A government spokesperson acknowledges that heat stress was challenging but says the government has introduced legislation to protect workers, as well as new national heat stress guidance.

The human rights organisation says themajority of migrant worker deaths in Qatar are attributed to “natural causes”, cardiac or respiratory failure; classifications which are “meaningless” without the underlying cause of death explained, according to one expert cited. Amnesty says intense heat and humidity exposure is likely to be a significant factor and has urged the Qatari authorities to put in place better protections for workers. A government spokesperson says: “Qatar remains steadfast in its commitment to labour reform and will not be thrown off course by any organisation that seeks to discredit the progress we have made.”

Qatar finally launches sweeping reforms to its labour laws, ending kafala and introducing a “non-discriminatory minimum wage”, the first in the Middle East. The reforms are widely lauded by the ILO and cautiously welcomed by human rights groups.

A multi-country investigation by the Guardian finds at least 6,500 workers from south Asia have died in Qatar in the 10 years since it was awarded the right to host the World Cup. The findings expose Qatar’s failure to protect its 2 million-strong migrant workforce, or even investigate the causes of the apparently high death rate among the largely young workers. The Qatar government says that the number of deaths – which it does not dispute – is proportionate to the size of the migrant workforce and that the figures include white-collar workers who have died naturally after living in Qatar for many years. It also says that only 20% of migrants from the countries in question are employed in construction, and that work-related deaths in this sector accounted for fewer than 10% of fatalities within this group.

November 2021
‘We have fallen into a trap’: Qatar’s World Cup dream is a nightmare for hotel staff

A year before the first match is due to be played, the Guardian exposes allegations of abusive working conditions in hotels included in Fifa’s hospitality packages. A Qatari official said Qatar had a zero-tolerance approach towards violating companies, issuing harsh penalties that included fines and prison sentences.

We reveal how low-wage migrant workers have been forced to pay billions of dollars in recruitment fees to secure their jobs in World Cup host nation Qatar over the past decade. The Qatar government says companies involved in illegal recruitment practices have been severely punished and that 24 recruitment agencies were shut down and had their licences revoked for breaking Qatar’s laws.

April 2022
‘No one should suffer like me’: families of Qatar’s dead migrant workers left with nothing

The Guardian travels across the southern plains of Nepal to investigate how families of workers who died in Qatar are left in debt and without compensation after a failure to investigate deaths. A spokesperson for the Qatar government says that companies in Qatar are legally required to compensate the families of all workers who lose their lives in a work-related incident. The supreme committee organising the World Cup in Qatar says in a statement that its commitment to the, “health, safety and dignity of all workers employed on our projects has remained steadfast and unwavering.”

With only months to go before the start of the tournament, the Guardian’s Pete Pattisson travels again to Qatar to report on how migrant workers say they are being ordered home before the World Cup starts, leaving them in debt and without work. In a statement, a Qatari official says there is no government requirement for companies to repatriate employees or reduce their workforce before the World Cup.

On the eve of the tournament, security guards at the heart of World Cup festivities claim they are paid just 35p an hour, appear to only get one day off a month and are housed in dirty camps on the edge of the desert. In response, the Qatari government says that extensive action has been taken to combat exploitative labour practices and when violations are recorded, corrective action is taken and offending companies penalised. The Al Nasr Star Group, which employs the security guards, confirms the guards work 12-hour shifts but say they get two hours’ break each day and one day off a week.